This is the first cake I have done that involved making fondant figurines. It was requested by a friend of mine so I said to her I would give an honest go at it but I couldn’t guarantee they would look great. But after looking at a YouTube instructional I felt like this could actually be achievable and I think they turned out alright. If I were to change one aspect, it would be to use some gumpaste mixed with fondant to the core shape so that it would have held better – by the time I’d even finished the Bananas looked like they’d put on weight lol 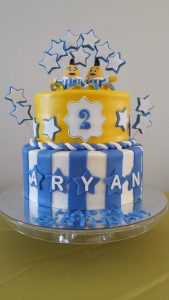 The bottom tier was a caramel mudcake, filled and frosted with vanilla buttercream. I did the blue stripes with fondant.

The top tier was vanilla white chocolate mudcake, filled and frosted with vanilla buttercream and covered with fondant. Unfortunately the weather has warmed up and it was a real struggle to get the fondant on without the icing starting to soften and make a bit of  mess 🙁 just had to get on with it and move fast. Next time I think I’d freeze the frosted cake to try keep it cool in the warm weather while covering in fondant.

All the other accents were made of fondant 🙂