These were made for my son’s playgroup picnic catch up today ahead of the Christmas break. I figured most kidlets enjoy chocolate cupcakes, and instead of making the bigger versions, these mini cupcakes may be more suitable for little fingers 🙂 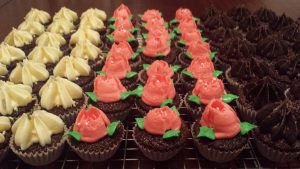 I did chocolate sponge for the cupcakes, and made buttercream flavoured vanilla, strawberry and chocolate. Because the weather is so much warmer, the buttercream doesn’t require nearly as much milk to reach the right consistency. Hopefully they held up well with the commute to the picnic in the park!

I used the Ateco tip #509 for the Vanilla buttercream kisses. This was an experiment as I had never used that particular tip before and I have to admit that tip is now a new fave! I finished the cupcakes off with some pastel coloured sprinkles, just to bring about a little bit of colour.

I used a Russian rose tip for the Strawberry buttercream roses, and piped vanilla buttercream (coloured Americolor Leaf Green) leaves using Ateco tip #352. I finished the cupcakes off with some round pink and white sprinkles in the centre of each rose. 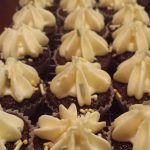 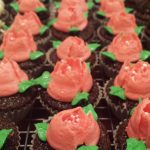 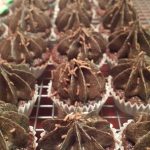