This is the second cake that involved an underwater scene that I’ve done – so I felt pretty confident in how to decorate it this time. 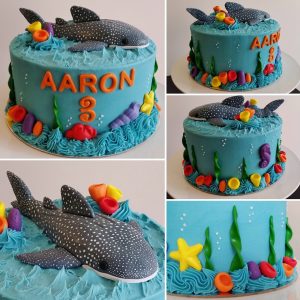 The cake itself: 2-layer 8″ chocolate mudcake, filled and coated with white chocolate ganache (coloured blue though haha!) The accents have all been done using coloured fondant. The whale shark itself was also made using fondant. The colouring was a mix of royal blue and black. The spots were done using Americolor Bright White painted on. Took a little bit of time for me to get the spots done right – I wanted it to look a bit authentic, with tiny dots at the ends of the shark but bigger spots on the centre of the body (I find it’s those little details that makes such a big difference to the overall look of a topper). 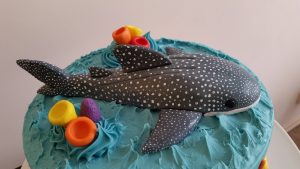 As with my previous underwater cake, I thought it might be nice to do the textured top to the cake with the waves. I feel each medium should be used to its advantages, ie when you have a frosting/ganache that you can texture like this, you should go for it! I don’t think you would be able to achieve such an affect with fondant. The longer I cake, the more I realise that it’s just like doing art – you have your different mediums and each have their pros and cons. There is no right or wrong.

I admit that when I first started caking, I was going to limit my cakes to buttercream only. But I quickly realised that it’s soooo limiting to do that! The use of fondant definitely has its places. It’s so great to be able to play with all mediums and try to find what works best for what purpose. 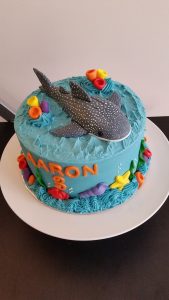 In order to do the other fondant creatures (starfish, crab and seahorse), I lined the chocolate mould with Crisco prior to putting in the fondant. I’ve found that to be a pretty effective way to be able to get the fondant out afterwards easily. (Last time I used cornflour – I found it a bit messy lol)